Looking at work with fresh eyes

Just been through my recent work with some good friends and can't tell you how good it was to get fresh eyes on it! The act of weaving is so concentrated and intimate between me, the design, the weft and the warp, it's great to get a bit of day-light in there.... and words!

Photos will follow when they're in a state to be seen - the tapestries, that is, not necessarily the good friends! (But you never know!!)

Posted by Sue FitzGerald at 3:45 AM No comments: 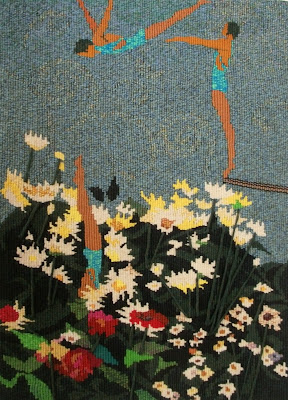 I trained as a printed textile designer at Leicester and Winchester Schools of Art, after which I created my own textile design company. I created individual items for the fashion industryand also taught textile design for around ten years in the South of England.

A friend showed me a pile of wood and said it was a large tapestry frame. She told me I could have it if I wanted, to use it or burn it. I learnt how to use it by trial and error. 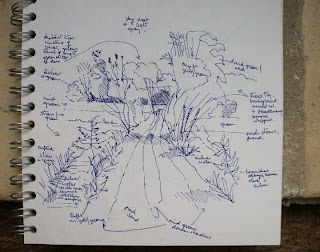 I'd never been very convinced that my art-work up to this point had stood on its own, maybe because of my training as a designer(?) To my surprise, however, I found that all my drawings were in fact preliminary drawings for tapestries.

The sketch on the left is from a path near our home at the time. I saw it almostevery day, through the mud of the winter round the year to the startling bright greens of spring, the heavy heat of summer, bold colours of autumn and back to winter again. 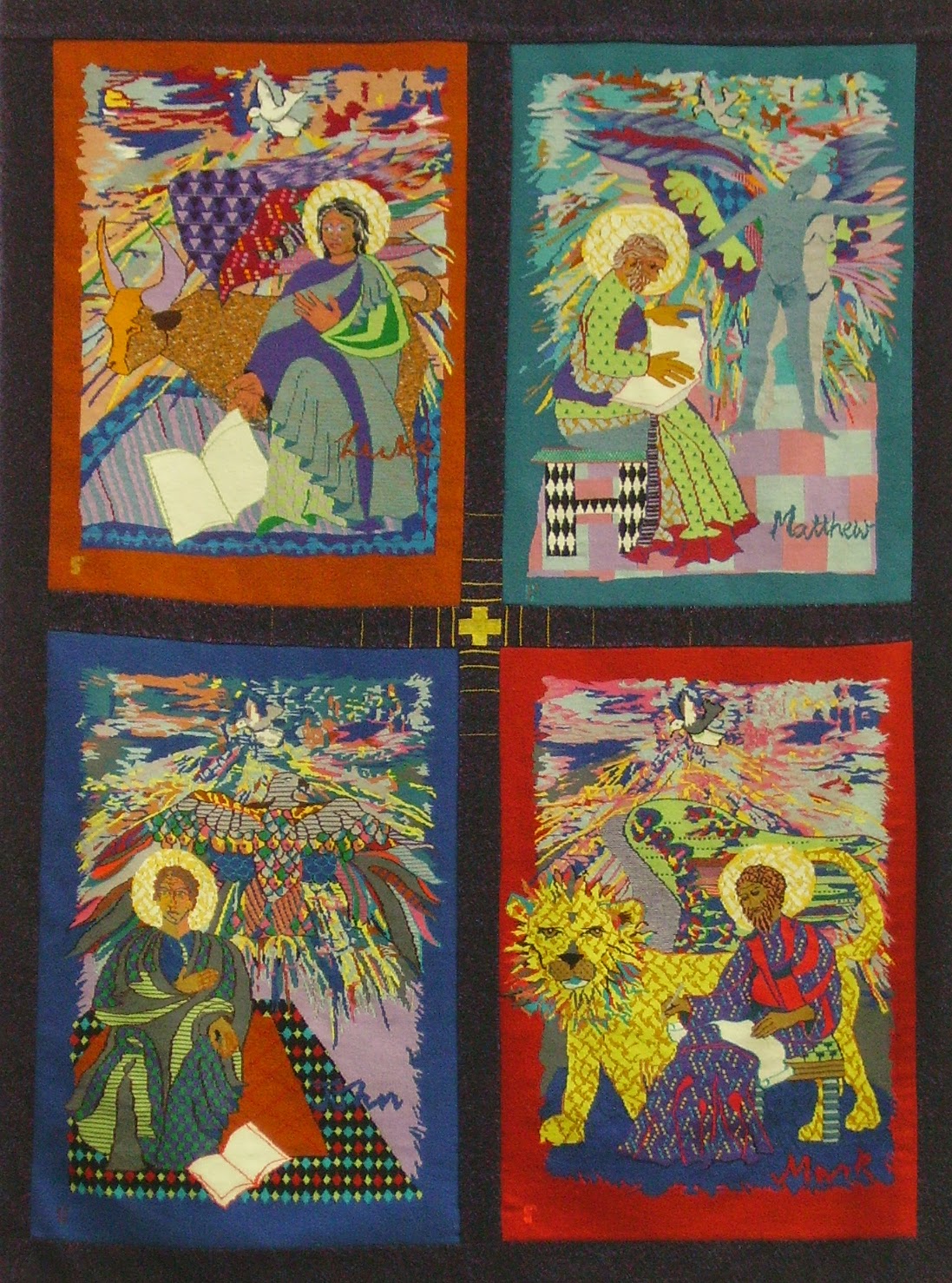 Tapestry came into my life about the same time as the introduction of home PCs with drawing programmes. In the first flush of an on-going enthusiasm for this medium, I came across the beautiful style of early illuminated manuscripts and put them together to design "The Four Apostles". They are shown with their icons _ Matthew with the winged man, Mark the winged lion, Luke the winged ox and John with the eagle. Each of them has a dove above him, to show the inspiration of the Word of God. 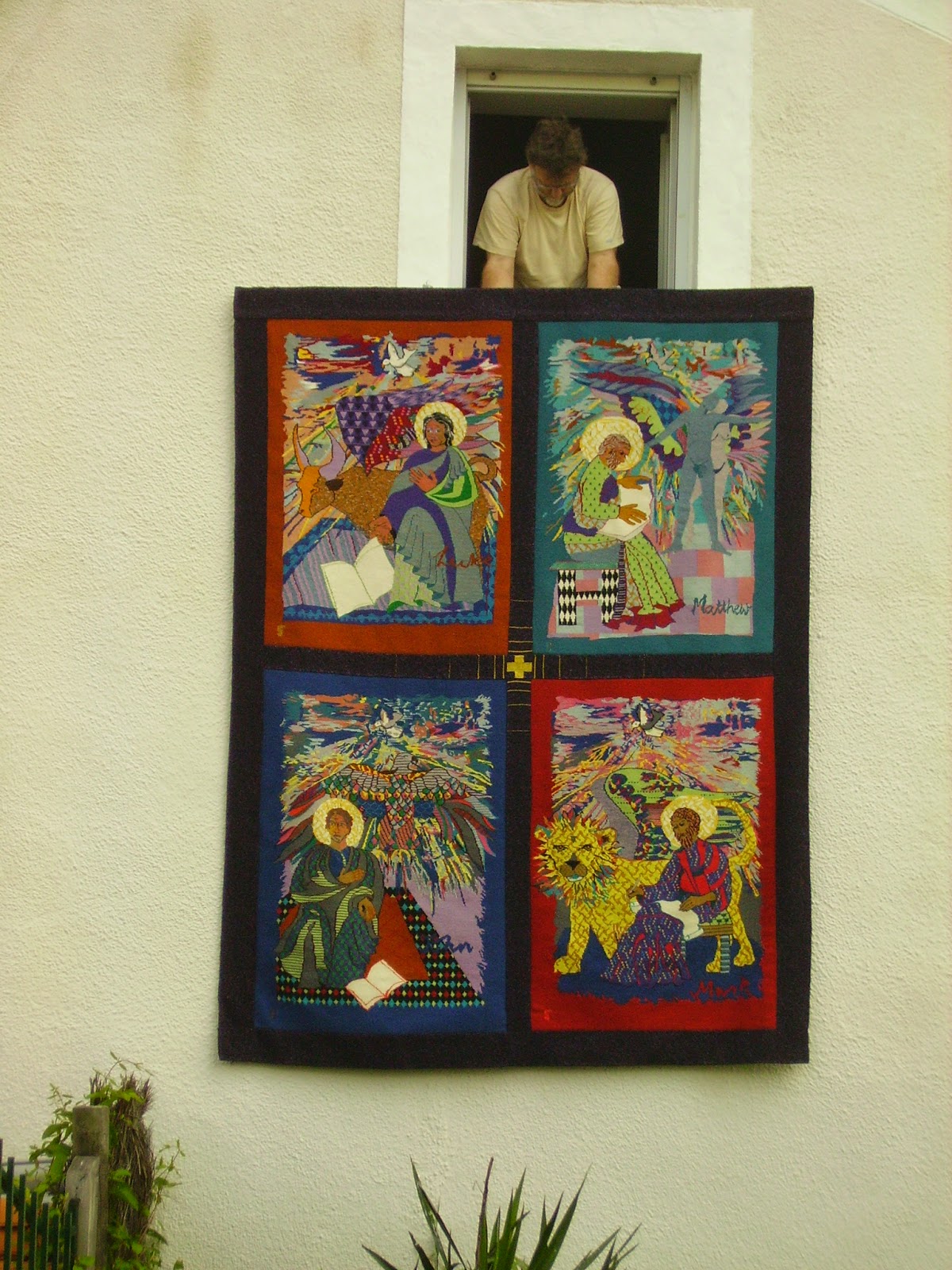 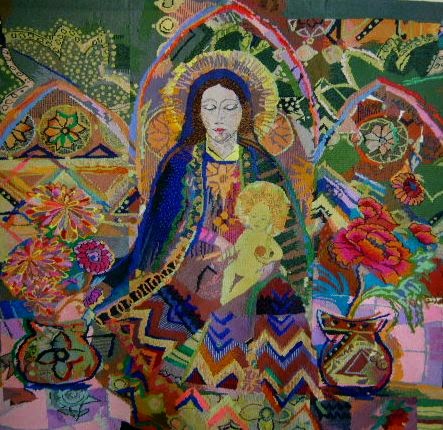 During a visit to Notre Dame in Paris while I was a student, I became fascinated with the images of saints, especially in stained glass. I decided at some stage in my life that I would try to make an image of Mary and the Christ child. I wanted to look at the role of Mary in the story and to explore the place where traditional and modern decoration meet.
At this time, I still hadn't discovered tapestry, so later when it all came together, and over a couple of years, I wove this image.
It was designed and made in three panels, but after exhibiting it in several exhibitions, I decided they needed to be attached together as one big piece. It's around 180cm high by 150cm wide. I have since woven two panels to accompany this piece - the Kings and the Shepherds, which are slightly higher, near 190cm. 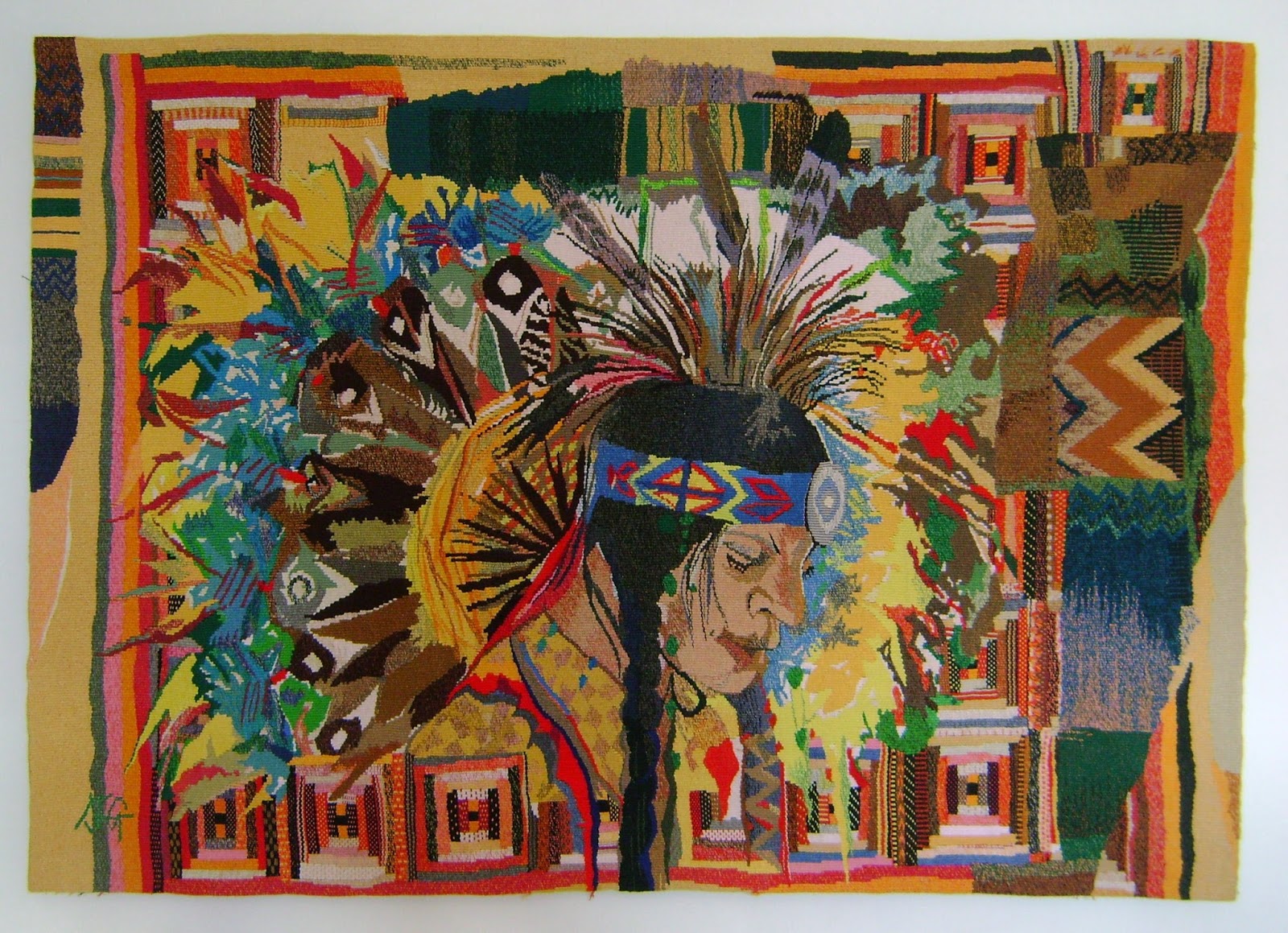 "The Ghost Dancer"  is  based on two source
threads of the USA. One is the dancer himself, dressed in traditional head-dress and garments, gathering his strength to perform a sacred dance and the other is the background which echoes the Amish tradition of quilt-making - two belief structures crossing in one tapestry. 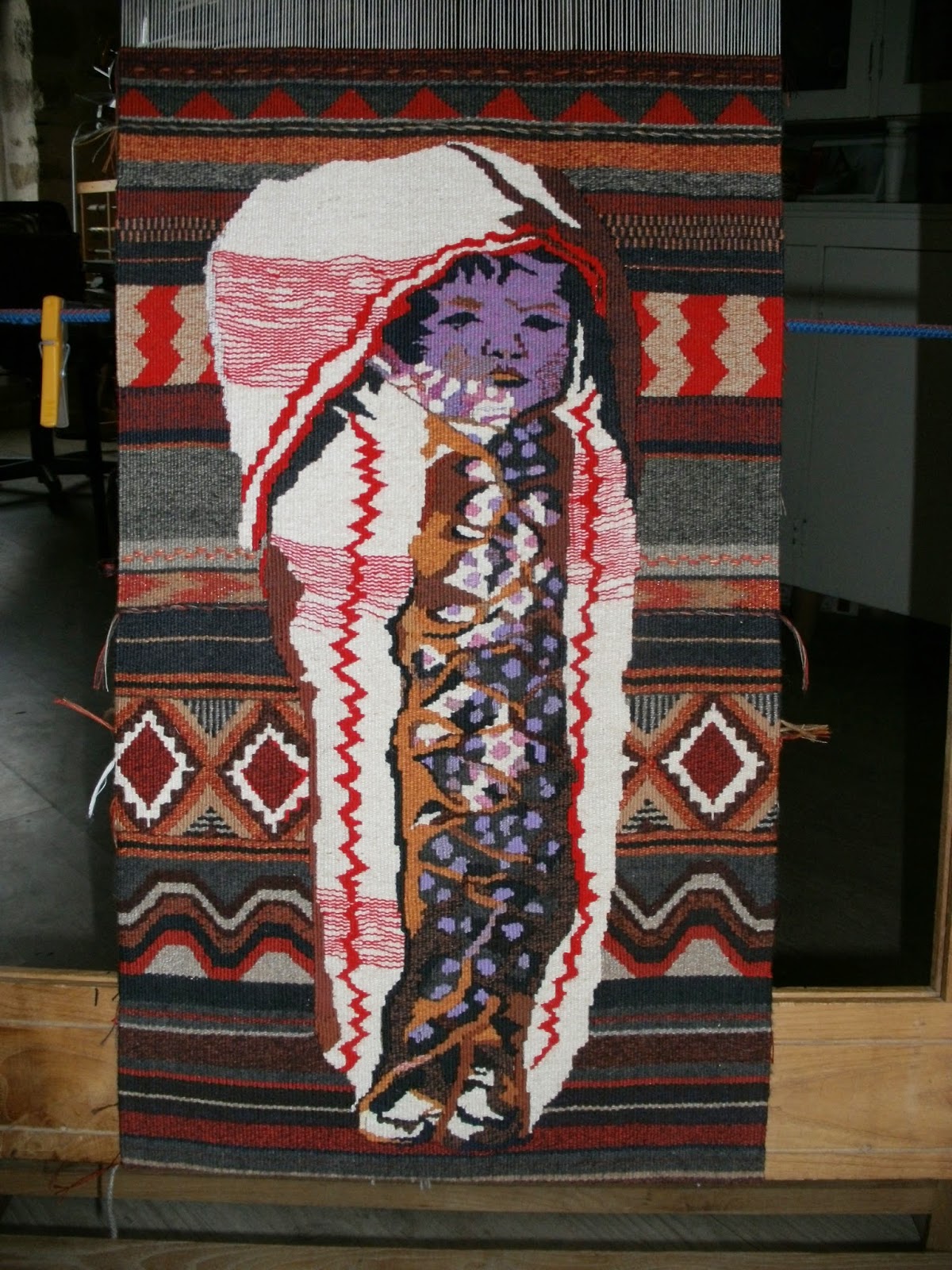 "The Indian
Papoose", (60 x 36cm) a detail of which was included in the British Tapestry Group's exhibition in York, comes from this time.The background is inspired by patterns in Navaho rugs. 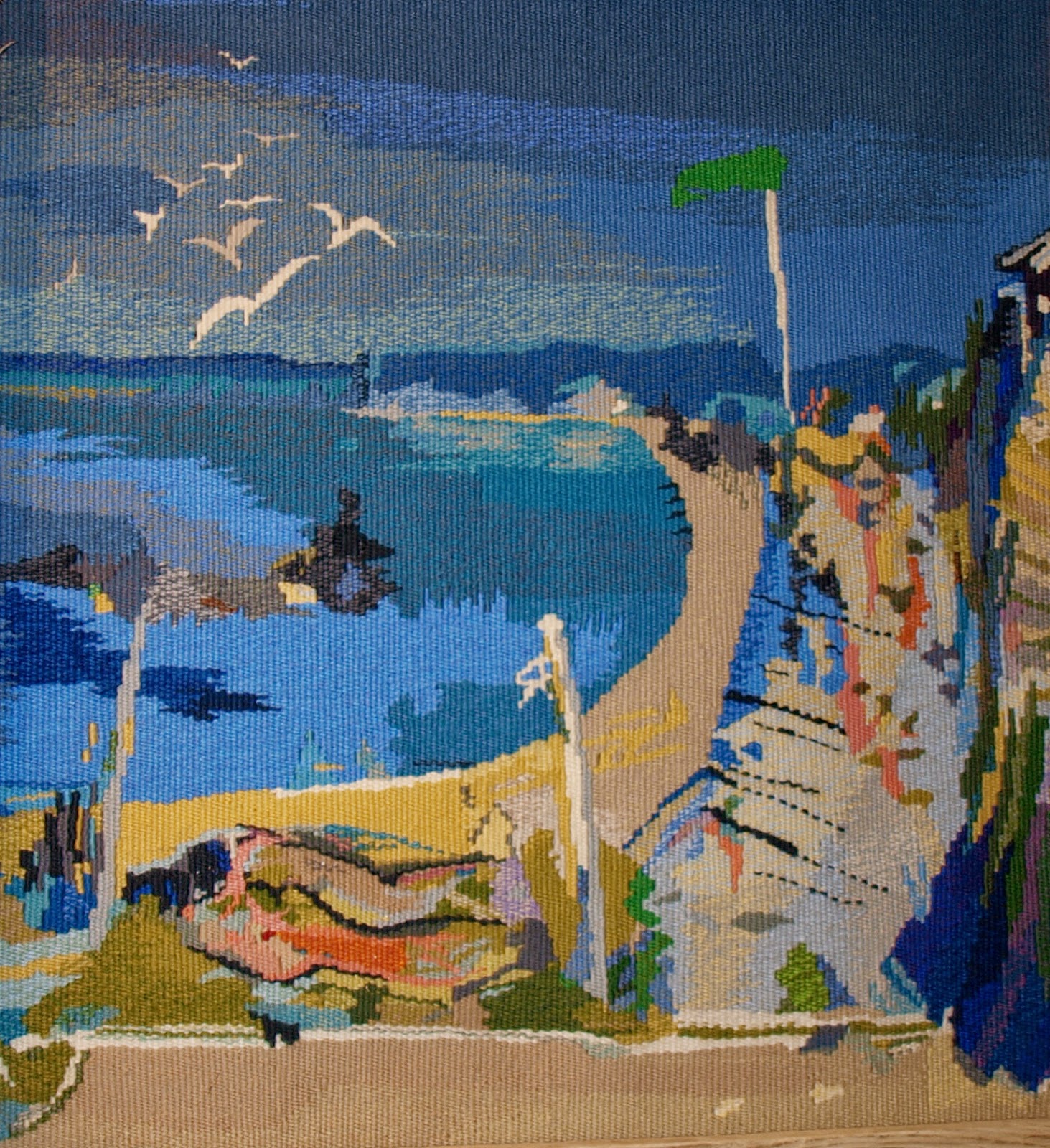 "Honeymoon - lovers in the sand-dunes" 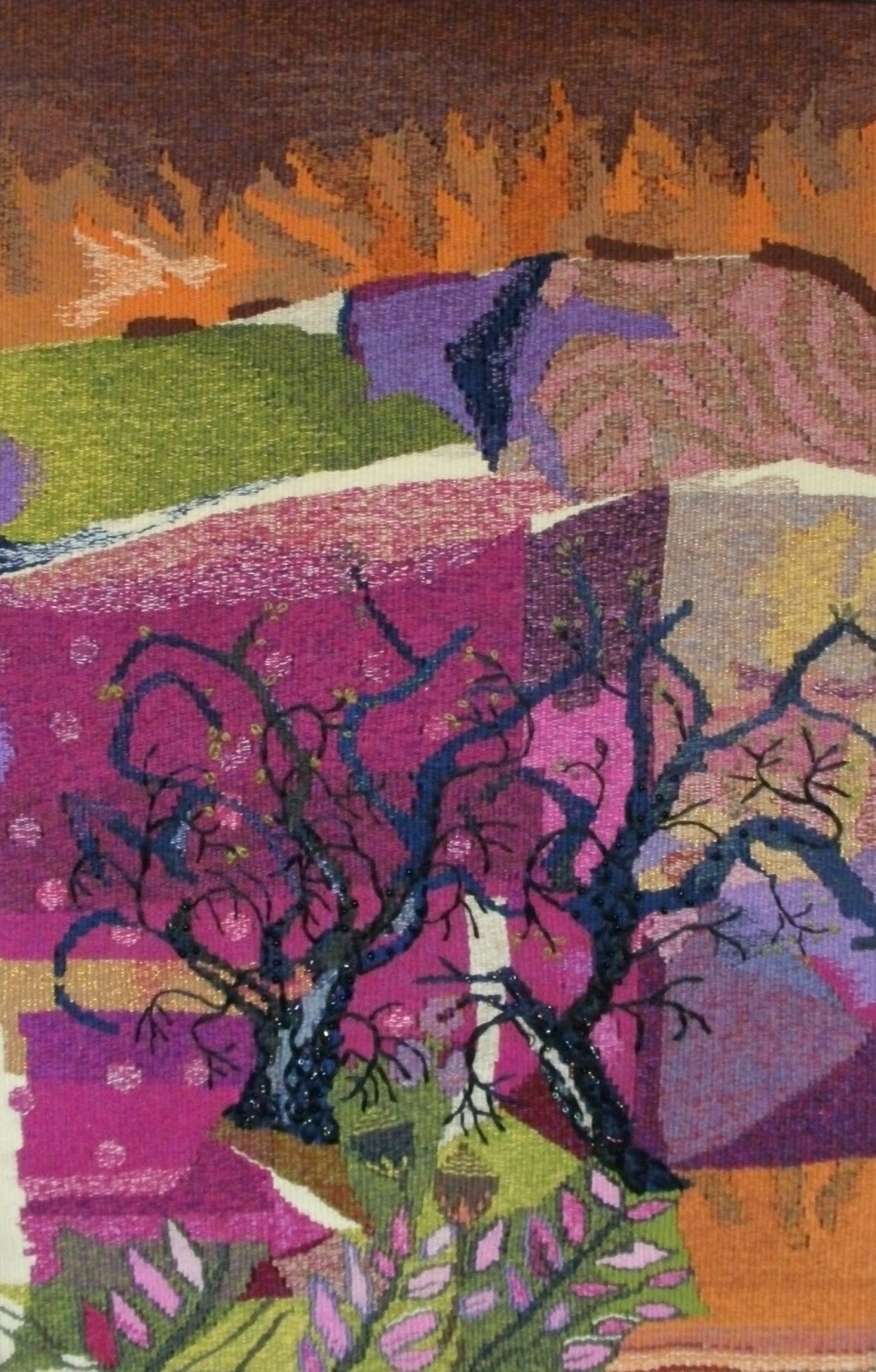 "After the fire,  New Forest" 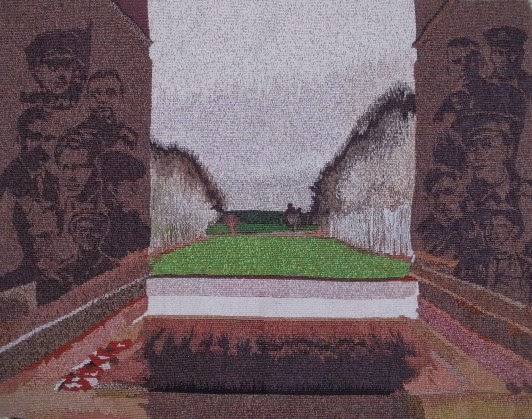 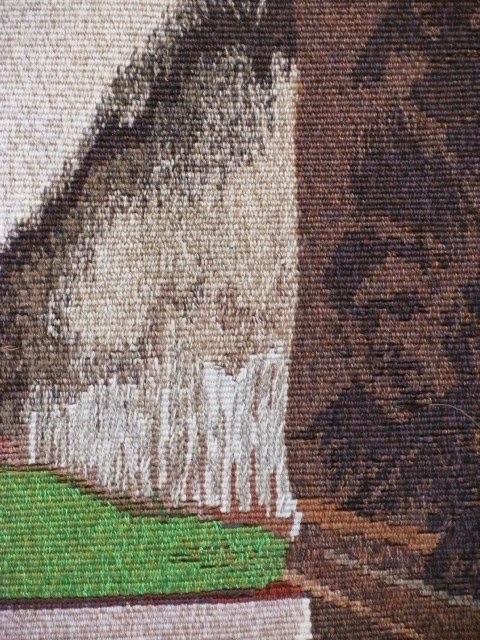 This image came from a visit to the Battlefields of the Somme in December 2013.

The Thiepval Memorial is to men who were never found.

RGis tapestry is a hommage to the many men who lost their lives.

On the left of the image poets, artists and composers who lost their lives are represented.  The Lost Generation.


Around four years ago I started working on smaller formats and this for two reasons. The first was technical: I wanted to see what the implications were on the design side, how far could the size reduce before it became a problem for the set of the warp and consequently, the size of the "stitch".

The second was the fact that there were several international exhibitions being organised, especially in America, which called for small format.

Here are some of the results: 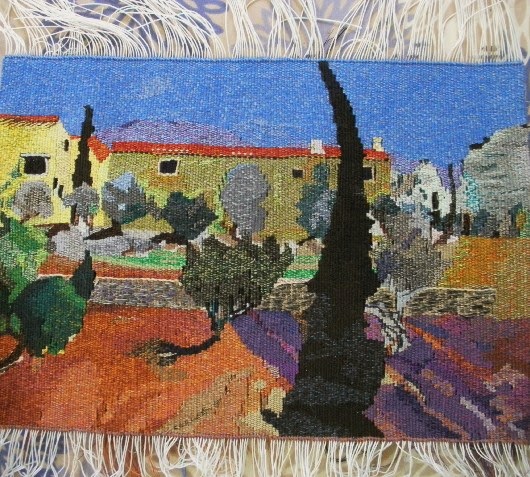 "Provençal Farmhouse & Landscape"
from a gouache by my husband, Mike FitzGerald. 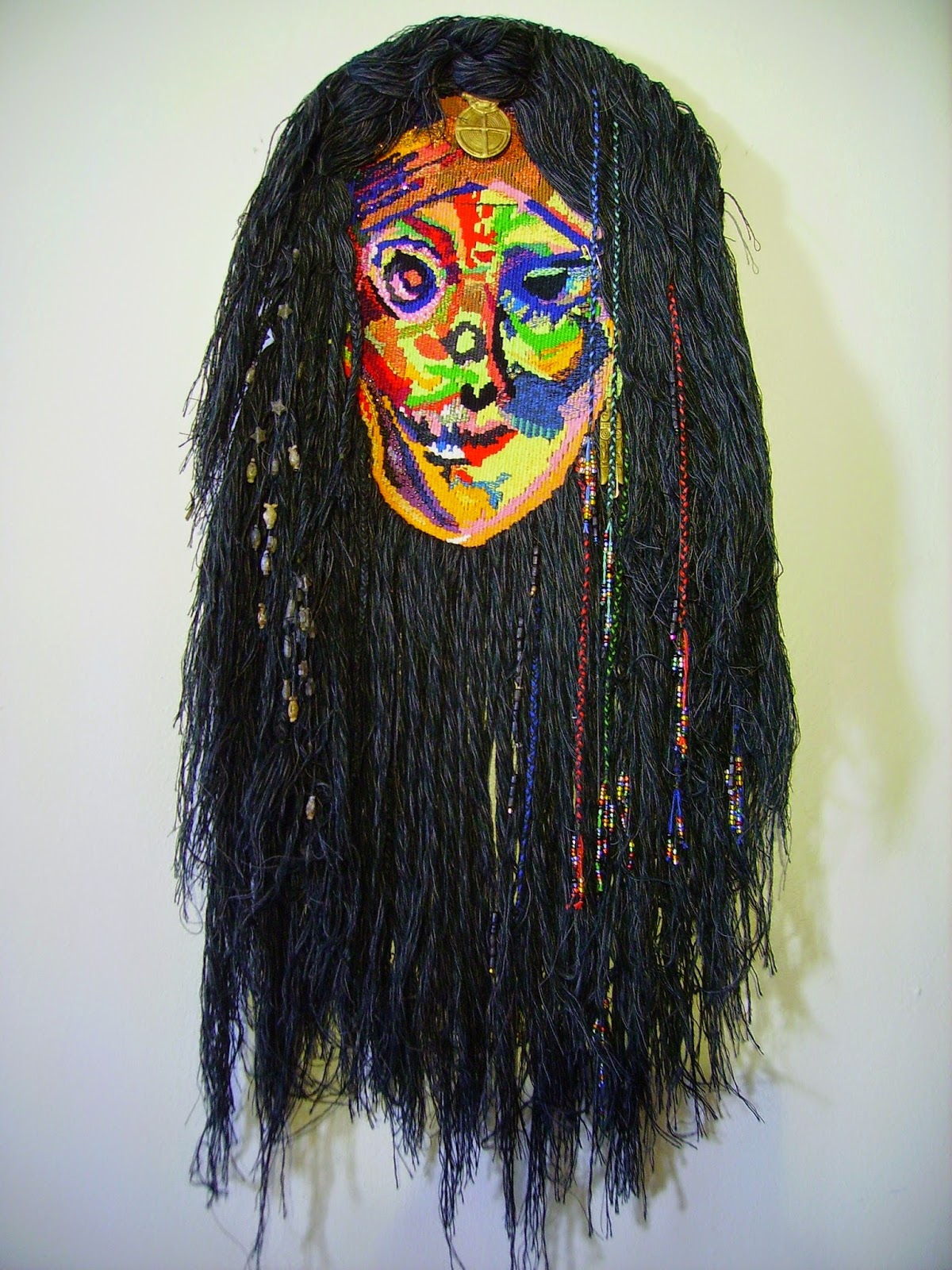 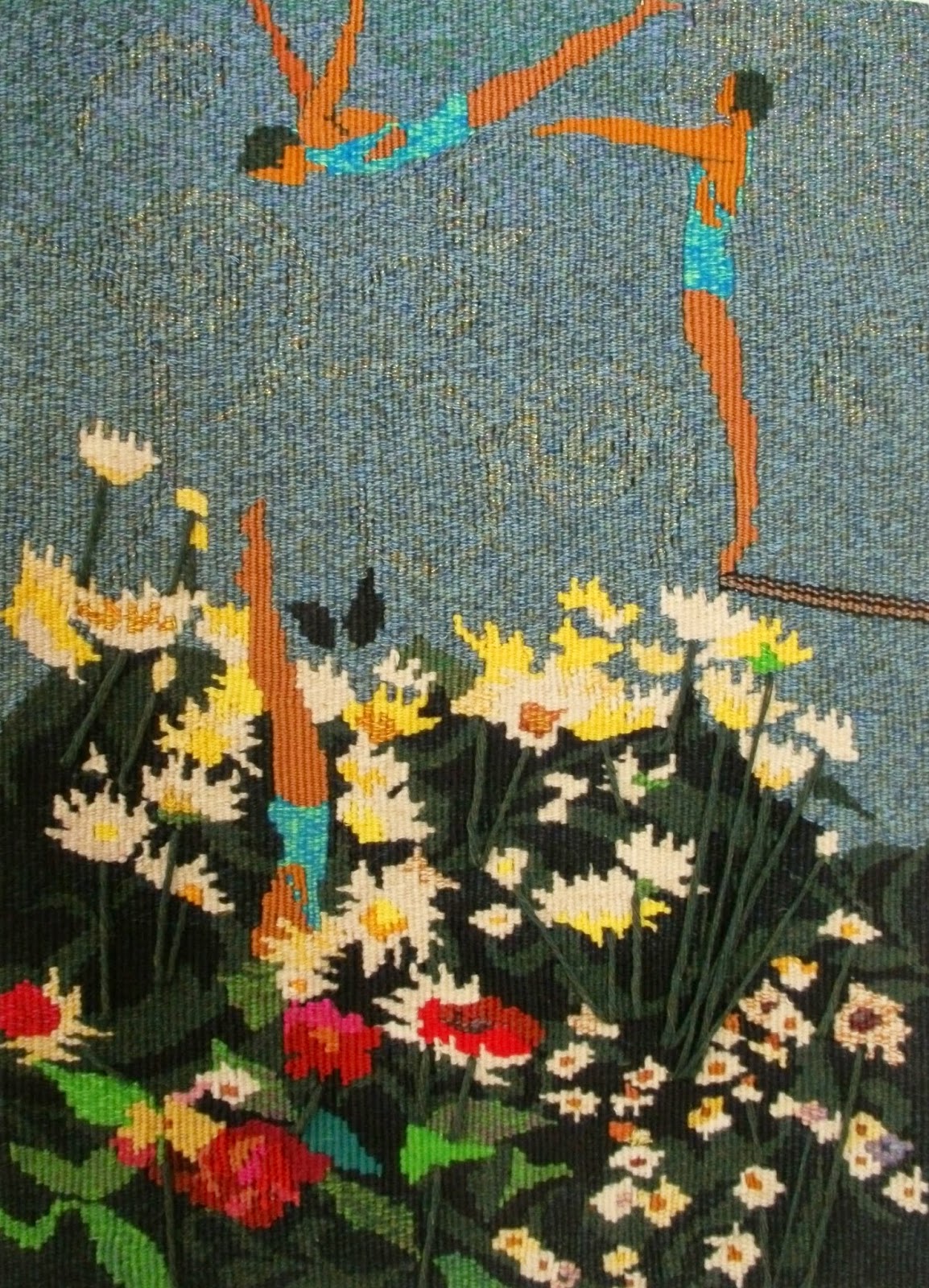 "Into the Garden- London 2012"
Chosen for the Blue Ridge Fiber Show 2012
When I'm in my garden in the summer, I sometimes feel like diving into all that riotous colour in the flower beds! This was the year of the Olympic Games in London. Two ideas, one weaving. 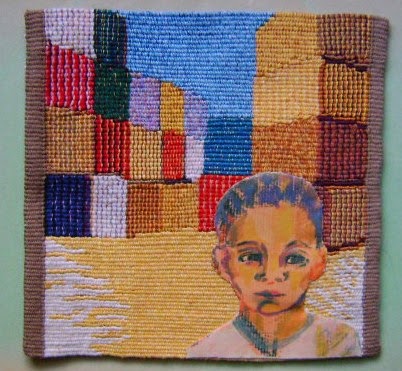 "C.I.F.L.A."
Chosen for ATA "Pacific Portals" Exhibition
The exhibition title sounded very romantic until I looked it up on the Internet and found it was the name of a large container port in Los Angeles. "C.I.F.L.A." makes reference to the Incoterm (International Commerce Term) for "Cost Insurance Freight", the boy could be a stow-away? He came from a photograph of another weaving, which was photographed, drawn over, printed onto cotton and sewed onto the woven background of containers stacked in the port. The Pacific Ocean can be seen in the square in the middle. 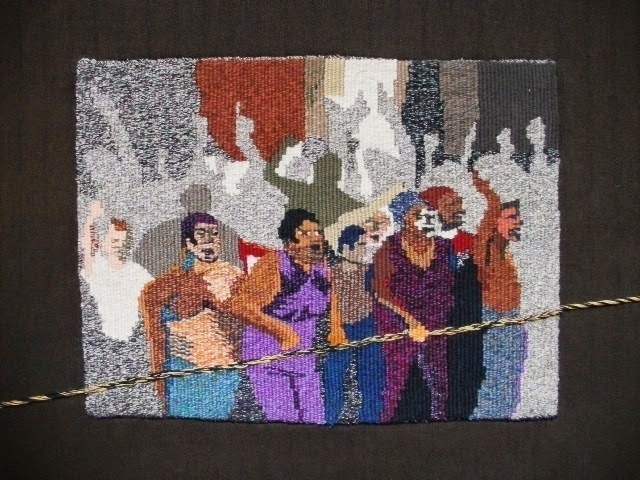 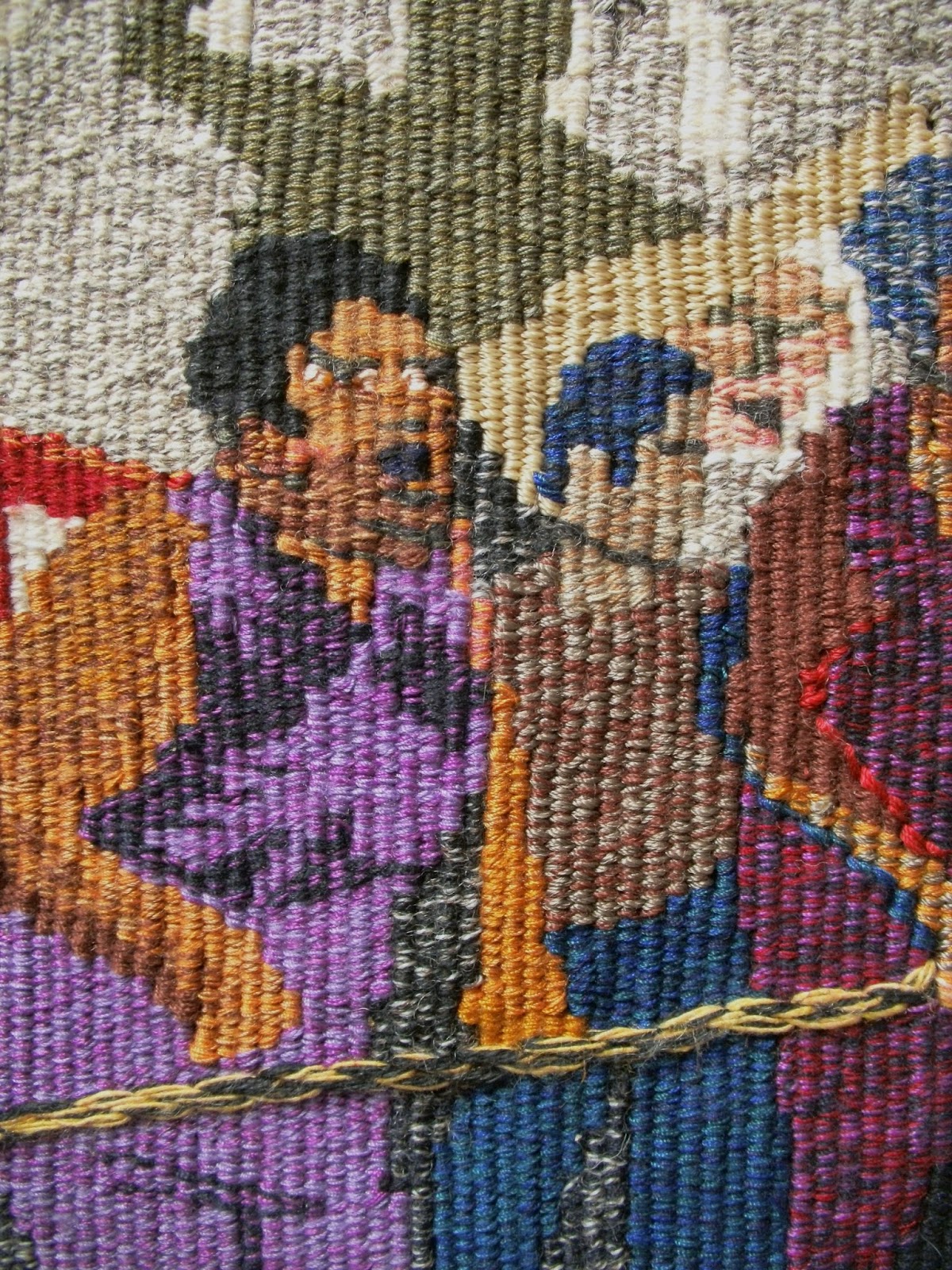 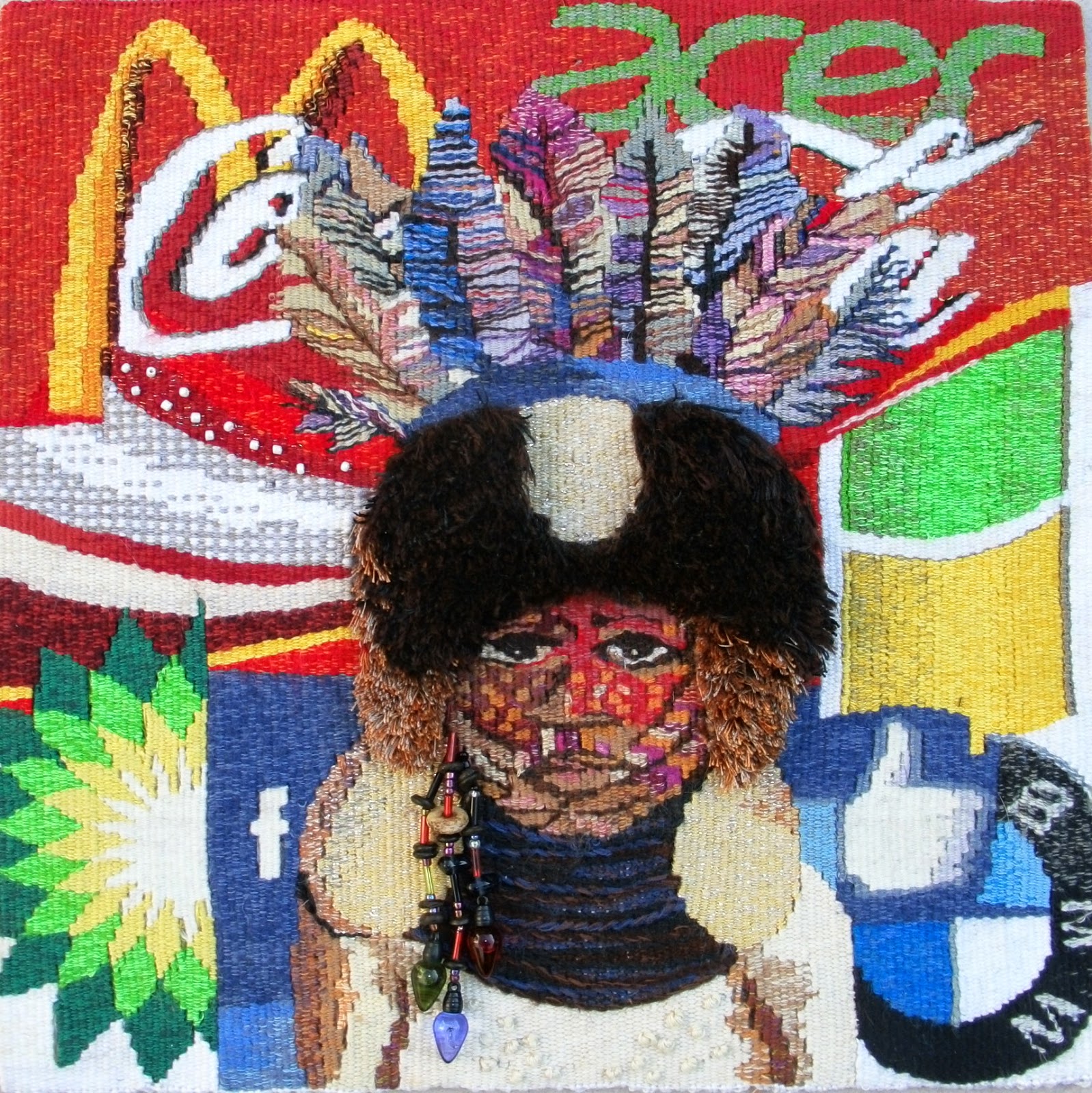 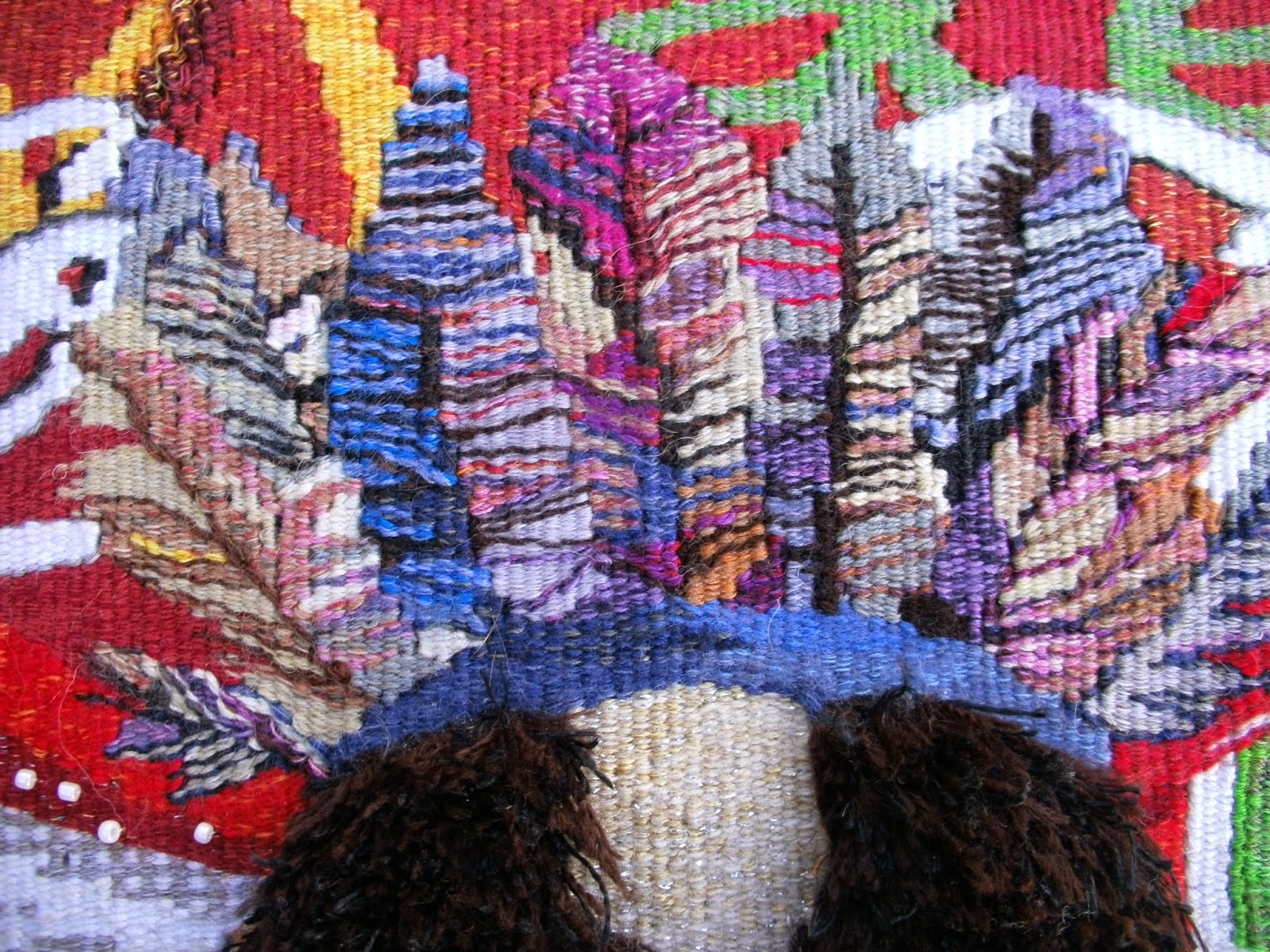 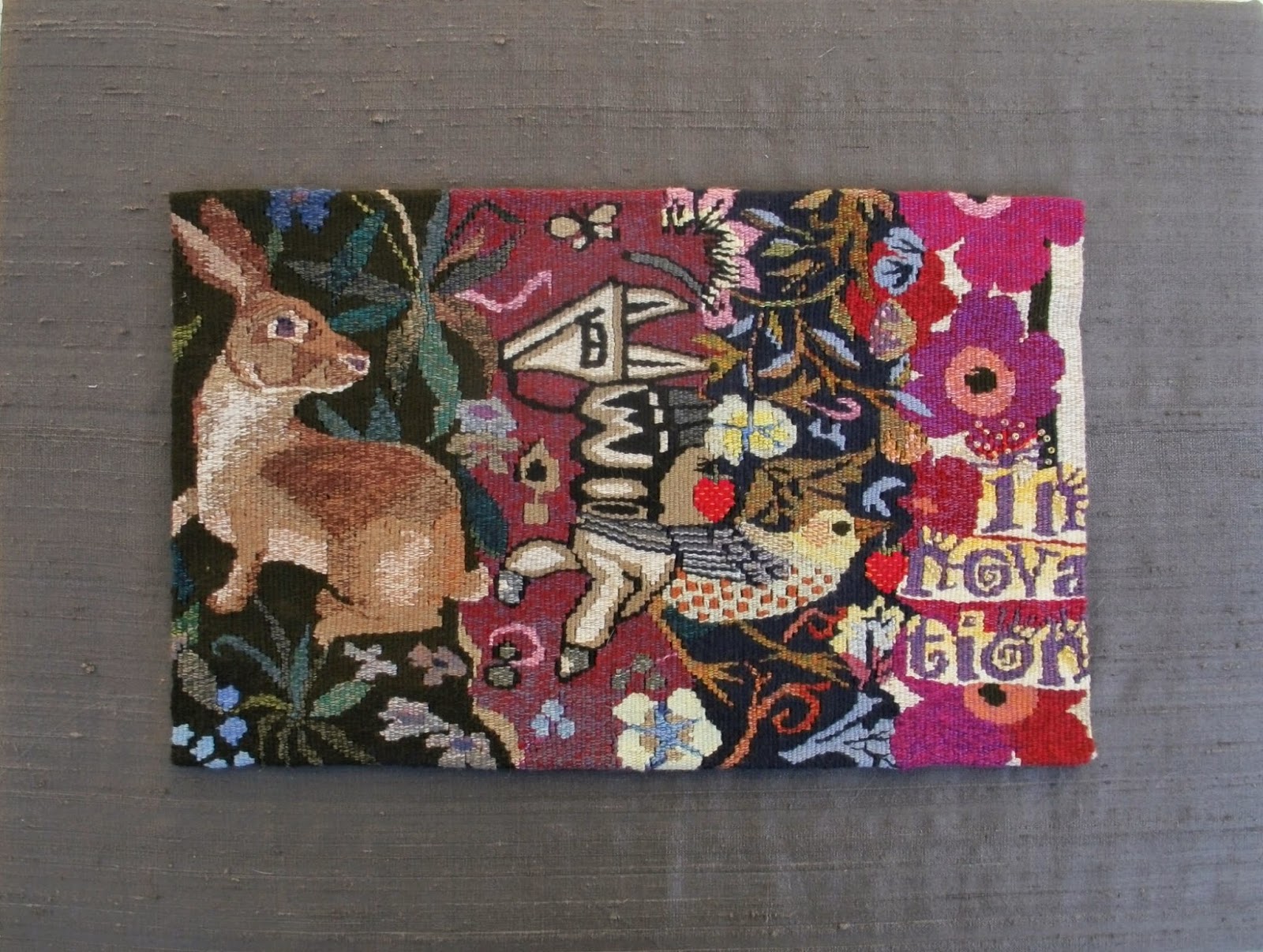 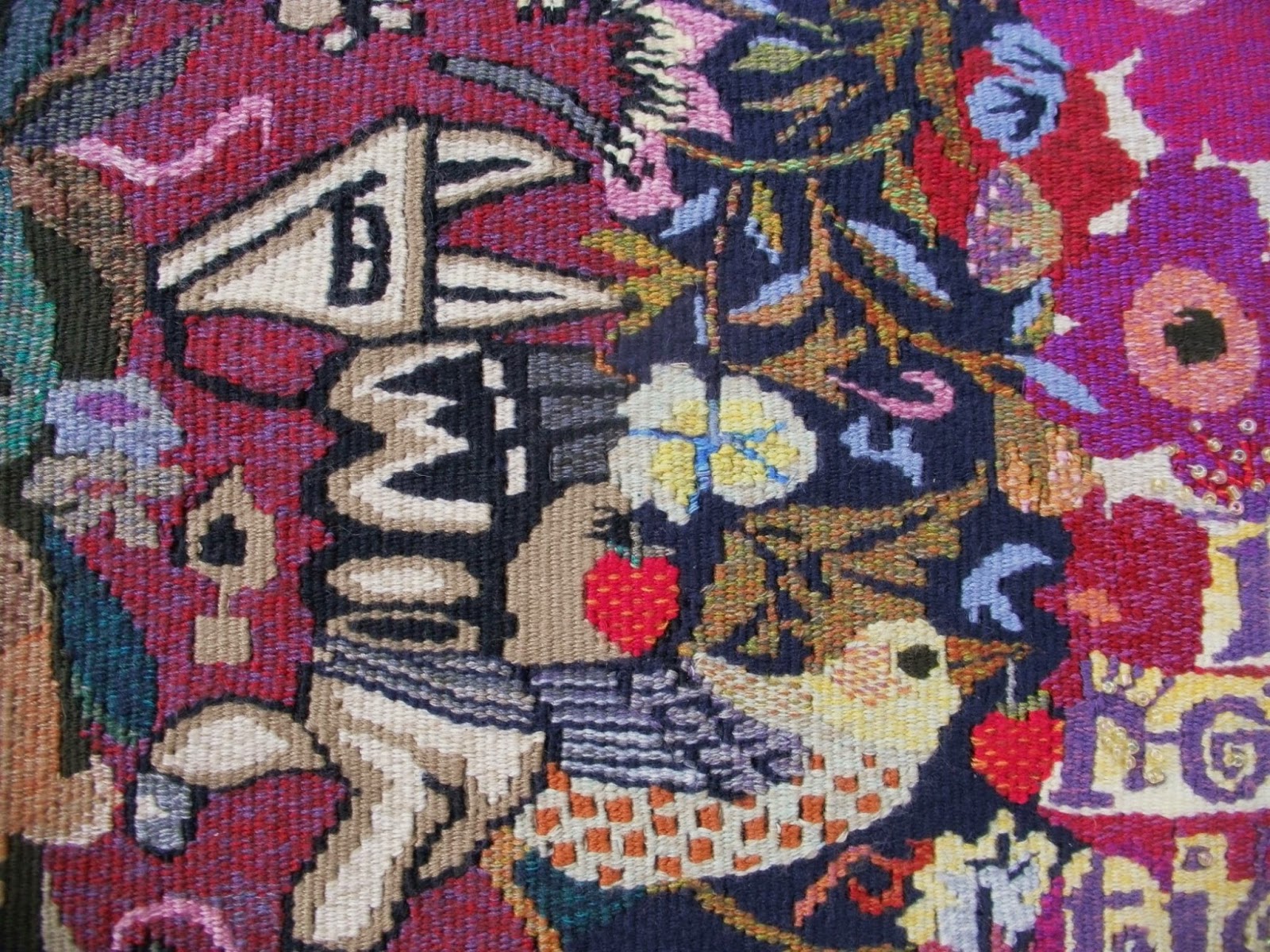 
Posted by Sue FitzGerald at 2:56 AM No comments: